Great news! After a few days of severe weather and equipment problems, we were able to head out with the drillers and get an access hole drilled through the sea ice at our candidate field site. The drill rig is quite a site to see, with a 48″ auger at the business end, and a huge tracked Cat Challenger vehicle to tow the drill over the sea ice and move snow around at the site. Once we got to the site, it only took about half an hour for the drillers to create the access hole. Then, they used the Challenger to tow our fish hut over the hole, and berm snow around the sides of the fish hut to insulate the bottom opening.

We will be able to drop the qualifier, “candidate” if we can determine that the underside of the ice around the candidate site (especially at the nearby ice shelf transition) doesn’t present a hazard to vehicle operations. Sea ice forms in platelets on the underside of sea ice. The ice itself is cooled from above by the cold air coming off the continent. The seawater is much warmer, at about -1 C. The layer of water that touches the cold ice above freezes into platelets. Those platelets consolidate over time and thicken the sea ice. A layer of platelet ice thicker than the vehicle would present a freezing hazard. Consolidated platelet “spires” could also be hazardous.

Platelets are almost everywhere under the sea ice right now, but they are larger and more numerous at our candidate field site than at the fish hut we borrowed last Tuesday. When the drill was removed from the hole, it sucked a hole’s volume of seawater and platelets up onto the surface. The platelets are beautiful, but if we had our way, we’d probably choose to have fewer of them in the area.

The view back to McMurdo and Mt. Erebus from our site was spectacular as winds swept snow up the slopes of Hut Point Peninsula, and steam rose from the top of Mt. Erebus. 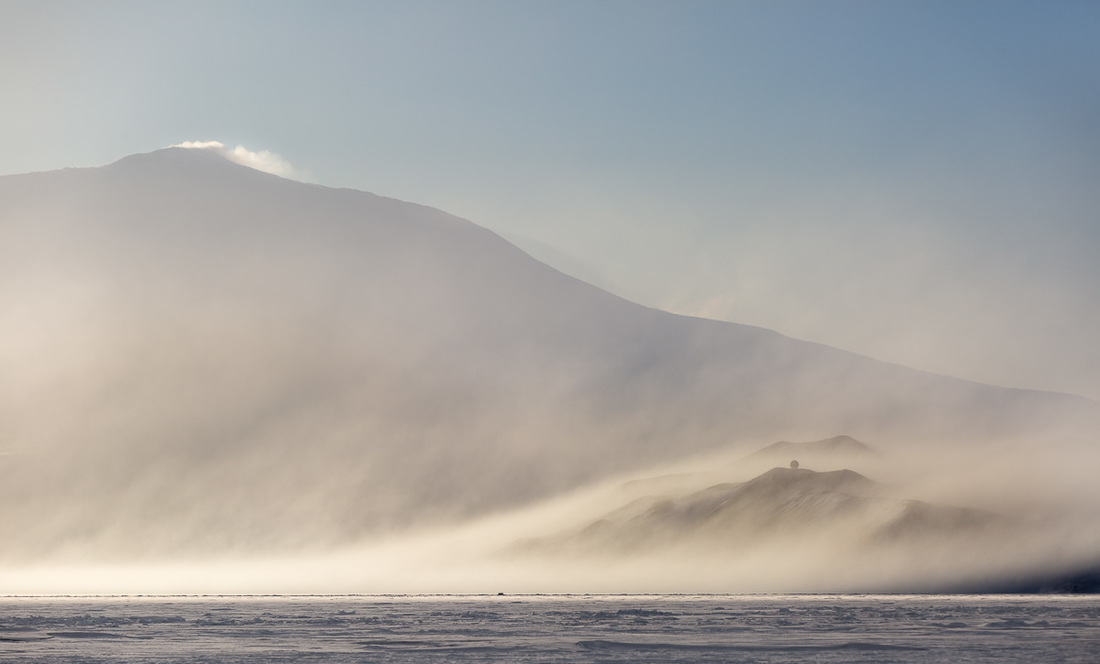 Winds sweep snow up the slopes of Hut Point Peninsula as we look back to McMurdo from the sea ice. (photo: Peter Kimball)