Mission Objective: Narrows sonde mission temporal duplicate run (to capture the effects on water chemistry through the connecting sill between East and West Lake Bonney due to melt water runoff since the last run through the narrows on November 18th).

The crew was up at 6:30am working on data reduction and blogs and at the bot lab by 9:30am. At 10am Kristof delivered to Bill the previous mission’s ice picking pose coordinates. These were re-plotted in the mission planner to obtain the true location for NR7. This particular location had been moved 50 meters further into East Lake Bonney at John Priscu’s request on the original November 18th narrows mission. Since we now had GPS locations for the true points, these were used to establish the target waypoints for today. The batteries completed charging and were re-installed into the vehicle at 11:23am. By 12:13pm the bot was back together and on top-off charging. The IMU was aligning and the mission plan was uploaded. At 12:40pm the bot was underway to the narrows following an initial failed attempt at ice-picking adjacent the melt hole. Ice picking was one of our final checks before releasing the vehicle on a mission. In this case the vehicle was too heavy and would not float up under the ice—a requirement on all our Sonde missions for conservation of energy while conducting the sonde cast. We commanded the vehicle back up the hole, removed a kilogram of lead and sent it back down. This time it passed the ice pick test and we sent it on its way. 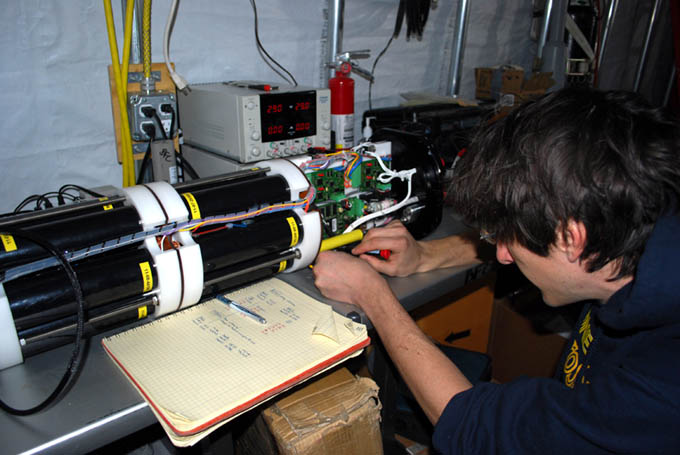 Chris tests the stack balances in the batteries before they are re-loaded into the vehicle for the December 2, 2009 mission to the Bonney Riegel narrows. 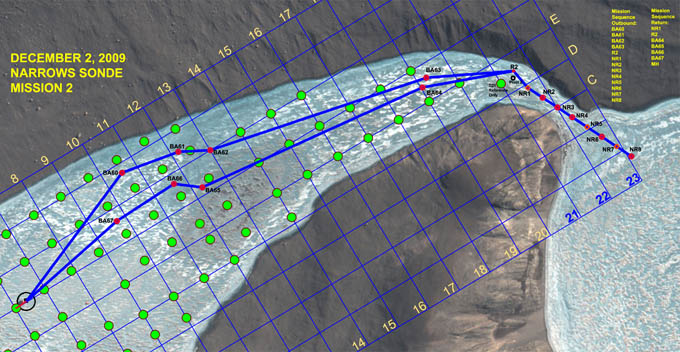 The mission plan was similar to the November 18th run with the significant changes in vehicle path at both the beginning and end to accommodate filling in missing gaps in the bathymetry data. Specifically the vehicle was targeted north to BA60 to BA63 on the outbound mission and to BA64 to BA67 on the return. The sonde casts through the narrows were identical to the prior mission.

At 2pm the bot reached the pivot target R2 just north of the Narrows. The navigation was off by 2.5 meters and Bill and Vickie on the ice tracking team reported this via radio to mission control. This was not enough error to cause any problems with the fiber diversion system (in place at waypoint “Pivot 2”) but by the time it reached the first scheduled sonde cast waypoint, NR2, the error had grown to 4.5 meters. The ice tracking team re-vectored the bot to the waypoint and the GPS coordinates were uploaded to the navigation solution, essentially re-initializing it to those known coordinates. The mission proceeded on schedule and on target from that point forward. By 6:15pm the bot was a half kilometer from the melt hole, having acquired all of the sonde casts at NR1 through NR8 and carrying a battery reserve of 32%. By 6:23pm it was 150m from base with 28% reserve. At 6:40pm the bot found the melt hole and automatically began its ascent. The auto-docking sequence was halted and the vehicle was put into station keeping mode while a new set of instructions relating to automated sonde cast testing was uploaded. The vehicle was then sent back down and retargeted to F6 where a fully-automated sonde cast was successfully accomplished using the new sensor fusion code. A full test of this new system was scheduled to take place at the conclusion of tomorrow’s final bathymetry mission. By 7:18pm the bot was back at the lab. 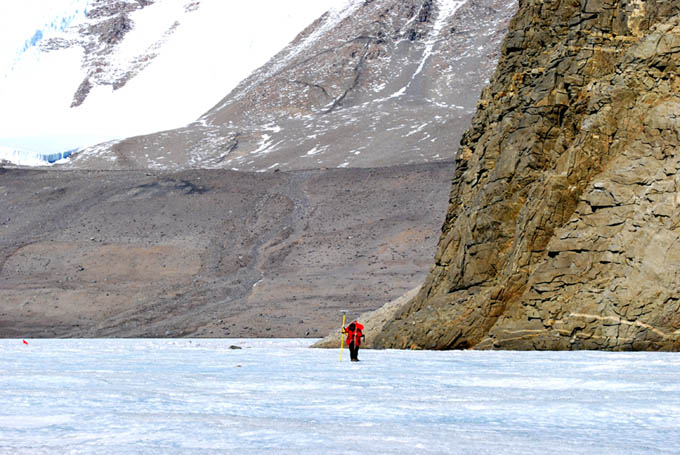 Vickie tracks the bot in real-time with RTK-GPS during the December 2, 2009 mission through the Bonney Riegel narrows. 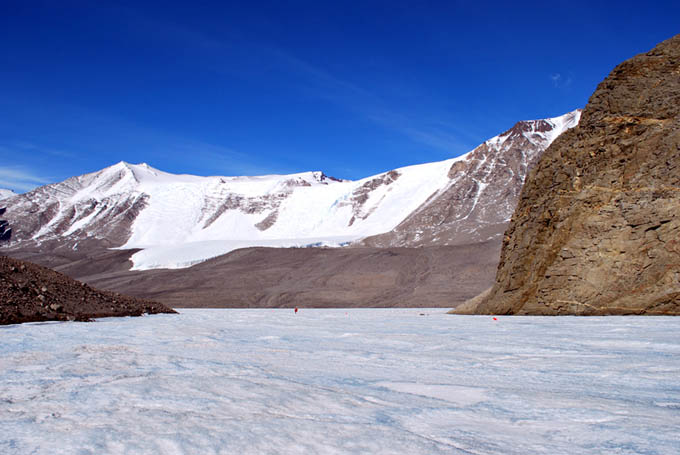 The full picture of the narrows with Bill Stone standing directly above where Scott’s party stood in 1903 (with 16.2 meters in water level rise). See the November 18th, 2009 log entry for a cross section plot at this location. 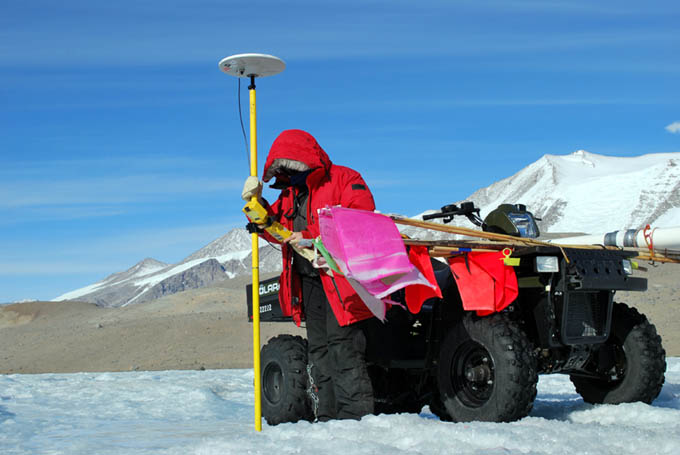 Vickie Siegel acquires the last of the GPS fixes for the sonde cast waypoints. With an 80 minute transit time for the bot to return from the pivot point at R2 to the melt hole, the ice tracking team retrieved the white pivot tube (seen attached to the ATV), collected the remaining flag markers, and their coordinates.

In a post-mission debriefing we discussed the navigation error at NR2. Kristof hypothesized that it was due to the fact that the bot failed the first test for ice picking at the start of the mission. It was brought back and some lead was pulled off. Normally, once the navigation solution was acquired and the bot launched the vehicle moved in a smooth succession with all sensors acquiring data. Aside from eating up power (which proved to not be a problem) the apparent problem had been that the navigation solution had been updated without the benefit of several key sensors—which were shielded by the melt hole. Without those sensors in the loop, the position estimate was coming only from doubly-integrated accelerometer data, which is known to drift over time even with the very high grade accelerometers installed in ENDURANCE. This was enough to inject both a positional error of several meters and a slight angular misalignment at the re-start of the mission and this extended to NR2 where we reset the solution to the absolute coordinates there (acquired by GPS). With the main nav sensors operating the solution maintained lock for the remainder of the mission. The total under-ice run length, not counting the excursion to F6, came to 3,982 m today with an under-ice mission duration of 5.6 hours. The sonde cast data were excellent and formed a complete data set with which to compare to the set acquired three weeks earlier. 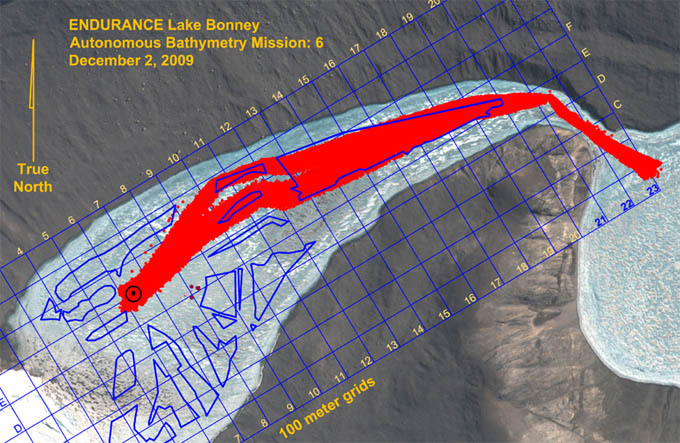 Lake bottom bathymetry was paved in and on target, mopping up the last of the gaps in the eastern half of West Lake Bonney. Only the area southeast of the limnological experiment zone remained to be scanned.