After a filling breakfast of pumpkin pancakes, compliments of Emma, we hopped on the ATVs for the morning commute to the Bot House. To give the Halloween morning a spooky feel, we made a pit stop to look at two of the many frozen, mummified seals on the east lobe of the lake (for more about these guys, see November 29 of last year’s blog).

Upon arriving at the Bot House, Chris, Kristof, Bart and Vickie worked through the pre-dive checklist for the bot in preparation for its first dunk while Bill, Jim, and Maciek went about clearing the layer of ice that had re-frozen over the melt hole. Once this inch-thick skin and the Hotsy melt fingers were removed, it became apparent that the hole was still not quite big enough. The bot has a diameter of just about 7 feet and the hole had a bulge of ice on one side that made it an oval rather than a circle. 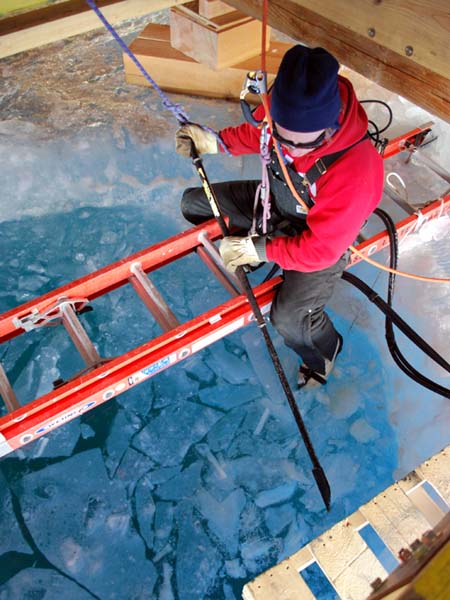 Wearing a harness for safety, Jim breaks up the ice that has formed on the surface of the melt hole.

After chipping at the bulge for a minute or two with little success, Jim decided to restart the Hotsy fingers and put them to work melting out the bulge. After a minute or two of watching the water surface re-freeze before our eyes, even as the Hotsies were chugging away, we decided to employ some more advanced strategies. The floor Bot House sits about 1 meter above the surface of the lake ice so the melt hole is fairly exposed to the cold wind gusting up and down the valley. The wind also chills the interior of the House, particularly when we have the moon pool cover (a sturdy plywood panel on rails) open to allow access to the melt hole. What we needed was something to cut the wind so we took some 2.5 x 2.5 m pieces of heavy, coated fabric and fastened it to the perimeter of the moon pool. To anchor the bottom of the fabric, which was now flopping in the wind, Jim crawled under the floor, pulled the excess fabric away from the hole, laid it flat on the ice and covered it with chunks of ice that had been chipped out of the hole. 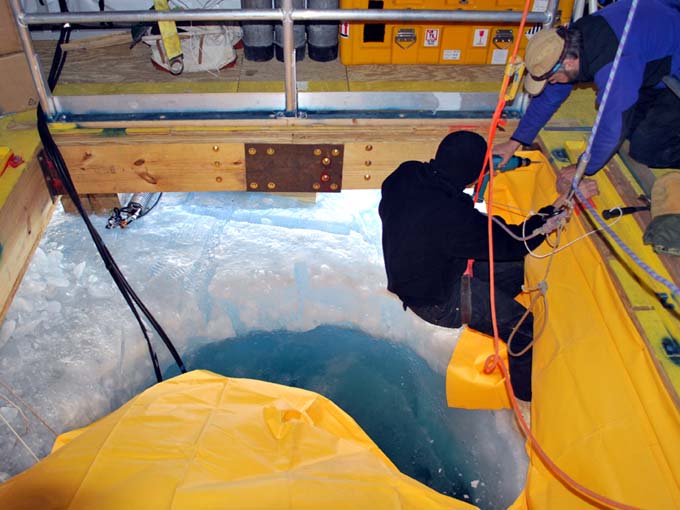 Bill and Bart attach the windbreak fabric to the edge of the floor’s moon pool. 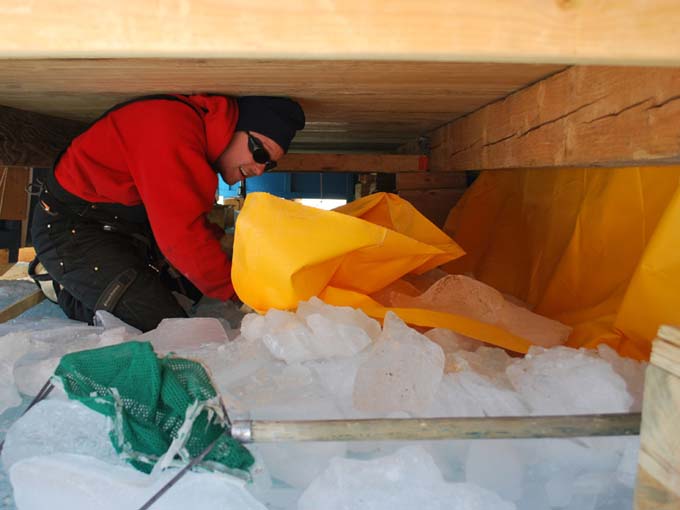 Jim stacks blocks of ice on the windbreak fabric to anchor it down.

Now that the bot dunk-worthy and the hole has a little more insulation from the elements we just have to let the Hotsies do their thing and return in the morning. 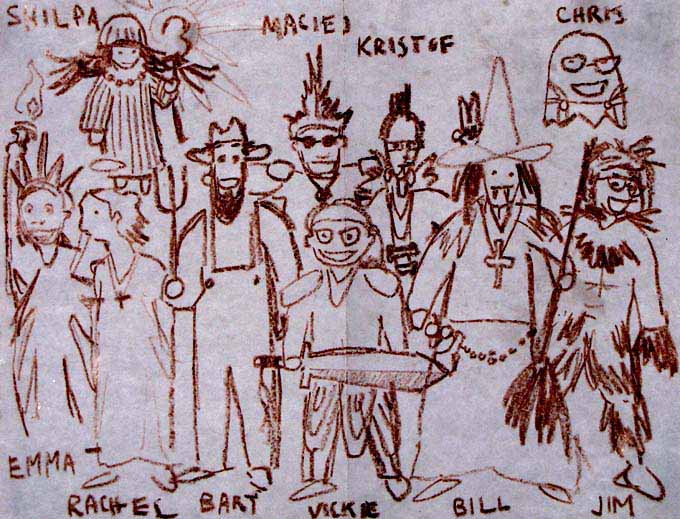 Not having a lot of entertainment options for off-time (nor costumes for Halloween festivities), Chris decided to dress up the team by way of crayon drawing!